[UPDATE 2020] There is now [Auto Build Marlin](https://marlinfw.org/docs/basics/auto_build_marlin.html) which itself is a Visual Studio Code extension that provides a one-button interface to build and upload Marlin Firmware to your selected board. This is an even better and easier way to update your printer to the latest marlin version.

Upgrading the firmware of the Geeetch A10 to use Marlin 2.0 is fairly simple and requires only two simple steps.

Step 1. Download the Marlin firmware and set it up with the right configuration for the Geeetch A10

You can either get the latest Marlin firmware from the official Marlin Firmware Repository and configure it yourself by copying the configuration files for the A10 from /config/examples/Geeetech/A10/ to /Marlin (and override the existing configuration). Further configuration to those files might be necessary.

Alternatively you can use my fork of the Marlin v2.0 firmware which already contains the right configuration for the Geeetch A10 and also contains a fix for the filament direction of the extruder (which was needed in my case).

Step 2. Download the Arduino IDE and upload the new firmware to the Geeetch A10

Enjoy your upgraded 3D printer with the new firmware. 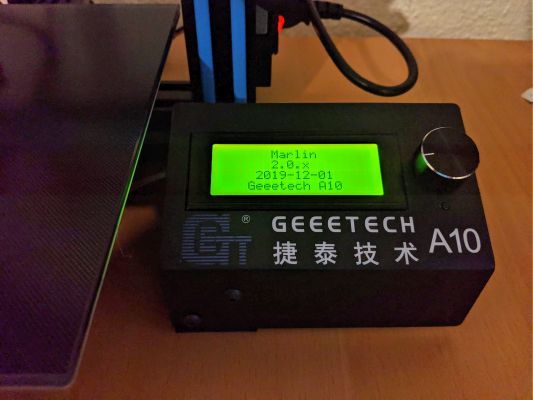